Over the last month or so, I have been working with the Nexus Innovation Centre at the University of Limerick. Gerry, Shane, Ian and I first met with them on the tenth of October. The idea was to gain experience by helping them add value to their online and offline presence.

The Nexus Innovation Centre aim to help budding enterpreneurs with ambition realise their ideas and connect with a supportive network of like minds. To this end, they have office space which they rent out to companies under their umbrella, as well as a number of free consultation services for companies not yet ready to commit to office space.

There are more than ten companies resident in the building, and several external members. All of these companies have websites, most of which were linked on a Nexus page, yet none of them had an explicit link back to the Nexus website. When trying to establish an online presence, it is important to know the audience, and we knew that the audience Nexus is trying to reach includes enterpreneurs and people who wish to become enterpreneurs. We knew that such people would visit the websites of other enterpreneurs. A simple link didn’t seem like enough, however – so we created a JavaScript button with a Nexus logo that would inform people even if they didn’t click it.

During the summer, the Nexus was putting together an initiative called ‘studio to street’. Enterpreneurs-to-be could collaborate in a targeted environment to develop an idea and then bring it to potential customers. This initiative had a good name but no logo, so we created one that kept focus on the name, while giving a visual association with the building that houses the Nexus.

We also worked on making the entry to the Nexus website a bit smoother. When we looked at their website initially, it was a bit difficult to see answers to the questions ‘what do we do?’ and ‘what can we do for you?’. Our solution was a landing page, which would show up instead of the current home page. Visitors could get an idea of the Nexus without having to navigate through menus to find the ‘about us’ page. Reasoning that visitors fall into one of two groups – students and enterpreneurs – we decided to answer these questions with those groups in mind. We created a page which asked if the visitor was a student or an enterpreneur, and directed each towards another page which explained the benefits the Nexus could hold for them. One more click took them to the current homepage, where they could explore as before, while being a little more informed. Below is a draft of the landing page, which is awaiting some text content. 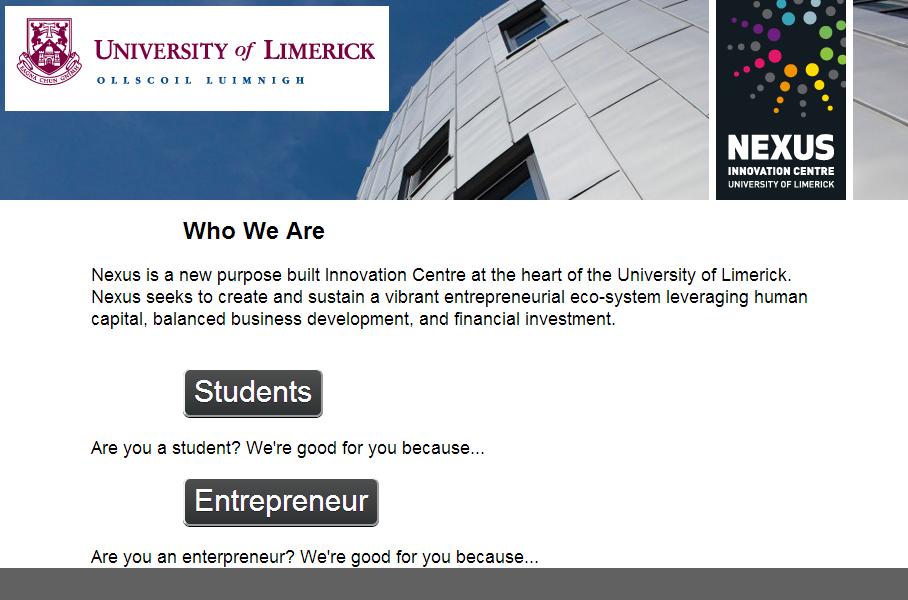 We developed some poster templates for the Nexus to use in promotion of themselves and their events. We used their highly recognisable logo and photos of the building to personalise these posters.

Finally, we put together some ideas for further promotion of the Nexus in the coming months, including a competition for the best business idea.

I think we learned a lot about working with a client here:

It was also good to see how useful open-source tools such as Inkscape (used for graphics) and Bluefish (used for HTML/CSS) can be in a professional context.

Learning in the module

Here be dragons (made of bad jokes, puns and weird imagery.)

The ramblings of an imaginative youth

A blog about Philip and his opinions on Video Games, Art and just general Navel Gazing

Not sure if you know this but, I’m kind of a big deal

Ludology from a developer

Let's go in there and take out that dragon!

Gravity-It's not just a good idea, it's the LAW!

The quite mutterings of a madman

Void of the Wordless